As the arrival of The 5G era, with the Internet of Everything, huge amounts of data are emerging.The data has become an important factor of production, the basic and strategic resources of data become more and more prominent, and become an important engine to accelerate the quality revolution of economic development, efficiency revolution, power revolution. The rapid growth of data makes it urgent to “Computing power”. 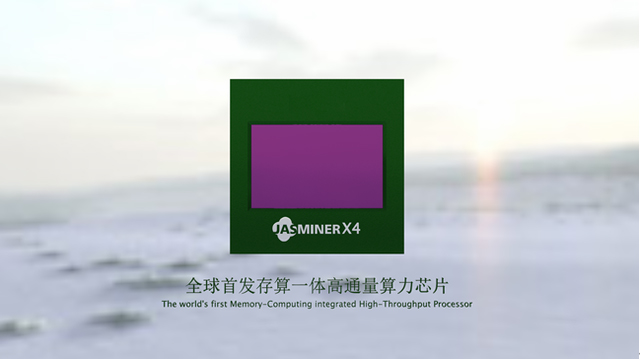 The chip, code name “Jasminer X4” is the world’s first memory-computing integrated high-throughput processor. Chip bare die size 678 mm2 , package size 45mm×45mm, memory access bandwidth 1TByte/s, storage capacity 5GBytes, Hashrate 65MH/s, which is comparable to high-end graphics card, but with the power consumption of only 23W, while the power consumption of graphics card is generally more than 150W. This will change the current global market pattern of chips, the memory-computing processors and their application products, which will shine brilliantly in the global competition stage in the future.  The exciting thing is that the product is not just a laboratory sample, but it can also be put in mass production. In the past, such a large-scale processor, computing and memory were distinctly separated. Even now, the computer structure of the whole industry is deeply affected by the tradition of separation of memory and computing. Such large scale memory-computing integration is the primary feature of this chip, which is unprecedented.

This black aluminum brick is the Ethereum Classic blockchain computing power brick product officially developed based on the above chip, a unique product brought to the world by JASMINER. Its typical feature is fanless design. It can be put at home, in living room, or bedroom, or office. Just put the power plug in, connect to Internet, very easy for user. It can run at the ambient temperature lower than 40 °C very well, continuously making contribution of computing power silently for very long time, daily power consumption less than 1kwh. Unlike ordinary graphics cards, which need to be inserted into the slot of desktop computer to provide computing power, this brick is very simple to use. With the weight of 5 kg, it is not easy to move and very stable; considering the safety of use, the edges and corners are wrapped with plastic. “JASMINER will sell this computing power brick product to the world to provide global distributed computing power for Ethereum Classic blockchain. At the same time, it is necessary to explain that it can also provide distributed computing power for Ethereum, the world’s largest public blockchain” .

“Beautiful as if made out of jade and ice; light and elegant, with tender branches and leaves.” Since ancient times,  jasmine flower has been widely praised by the world for its pure, simple and exquisite qualities. JASMINER is like a jasmine blooming quietly. On the road of chip research and development, it has widely absorbed the nutrients of Chinese and foreign science and technology. Now it is flourishing with lasting fragrance.

What worth mentioning is that Jasminer X4 will be sold simultaneously around the world.

Support
About Us
Contact Us
support@jasminer.shop
Copyright @ 2022 Jasminer.shop.All Right Reserved.